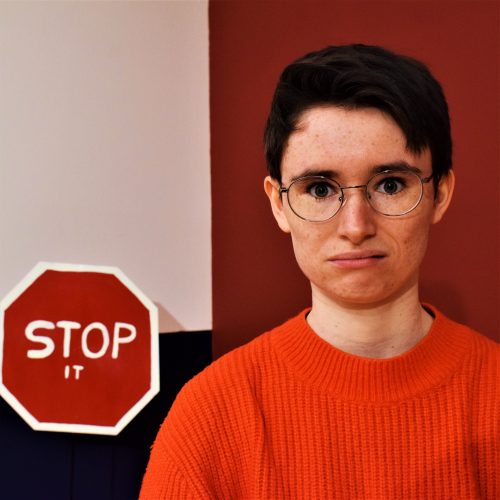 Morel is a scriptwriting, comic-making, drag performing gallery worker from Huddersfield, into naff sci-fi, fungi and fumbling for queer futures.

They are currently the curatorial trainee at the Attenborough Arts Centre, as part of which they are studying for a PGDip in Socially Engaged Practice in Museums and Galleries. They like to design activities that challenge who gets to feel confident in gallery spaces, having so far created and led the Trans* Post Project, reaching 250 trans* people and allies nationwide, and co-edited an edition of No Jobs in the Arts zine, focussing on disability access in the arts sector.

Morel is currently interested in comics, book-forms and print making, and has had graphic pieces on gender and language commissioned by Yorkshire Dance and published in The Mays XXVII. They are in the early stages of co-creating an animated short set in the Frisian wetlands.

From psycho-realism to sci-fi comedy, their plays have previously won the Cambridge Festival of New Writing and been shortlisted for the Footlights’ Harry Porter Prize, adjudicated by Alex Horne. Morel’s first full-length play, multi-media one-handler I’m Having a Wonderful Time in BADEN-BADEN opened to a five-star review at the Corpus Playroom in 2018.

Since graduating from King’s College Cambridge in German and Spanish, Morel has been published in Modern Poetry in Translation and continues to work freelance as a gallery translator. They are usually day dreaming about writing a thesis on what old space films have to say about queer world building and why so many alien characters are secretly coded as autistic!

Co-founder of Out+Loud queer open mic, Huddersfield, their drag counterpart Ding Frisby has gigged across the UK asking the big queer questions through comedy song, from the Cambridge Pride main stage, to a sell-out run at the Edinburgh Fringe with their troupe Dragtime!. Ding won a spot in the 2020 final of Europe’s biggest drag king contest, ManUp! and promises there’ll be an album one day.

Send a message to Morel O’Sullivan