Too Much World at Once

Get your tickets here! 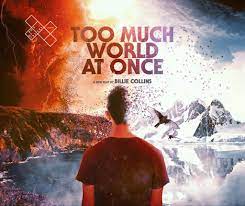 Billie Collins’ debut play TOO MUCH WORLD AT ONCE is set to premiere at HOME Manchester in March 2023, produced by Box of Tricks Theatre Company.

A lyrical, theatrical journey that spans continents and lives, the play follows Noble, who wakes up on his fifteenth birthday with the ability to transform into a bird – and his sister Cleo, who works for the British Antarctic Survey.