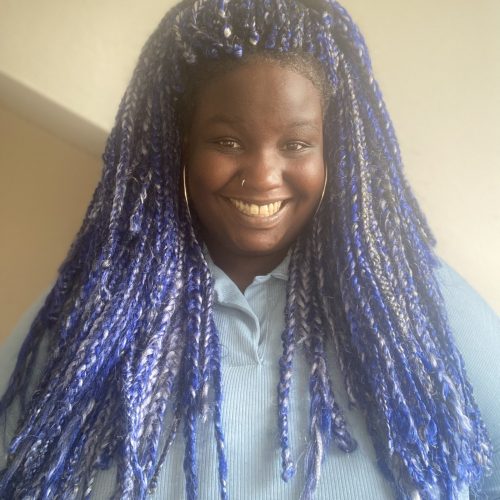 Based in Manchester
Email @r_awolola

She has been writing and performing poetry since 2015 when she was among the winners of the National Youth Slam, Slambassadors UK. She has since performed at the Hay Literature Festival, BBC Edinburgh Fringe Slam and the Brainchild Festival, become a Say Owt Slam Champion, an Obsidian Foundation Alumna and a Roundhouse Slam Finalist as well as securing feature sets at a number of poetry nights across the country.

Ruth writes for a variety of different audiences including poetry for children and young people. In 2018 she was one of five contributors to Rising Stars: New Young Voices in Poetry which went on to be highly commended in the CLiPPA (Centre for Literacy in Primary Poetry Award), where she performed in front of hundreds of primary school students at the National Theatre. She also at this time appeared on Blue Peter writing poems based on prompts suggested by the viewers (she got a great poem about a potato and a llama becoming best friends out of it!).

Her poems from the Rising Stars Collection have gone on to feature in several anthologies including Ana Sampson’s well received collections She is Fierce: Brave, Bold and Beautiful Poems by Women and She will Soar: Bright, brave poems of freedom by women, She has forthcoming contributions in children and young people’s poetry collections in both the UK and the United States.

Ruth has performed and led poetry workshops at primary schools, secondary schools, summer schools and summer youth programmes as well as universities, teacher training development days and libraries, working with participants to produce their own poetry. She recently produced a video with The British Library walking through a poetry writing exercise. She also leads public speaking masterclasses.

Ruth has contributed essays to blogs such as Media Diversified and Pop Up Projects and is currently working on writing more creative non-fiction as well as her debut solo children’s poetry collection.

How I Became a Poet - Media Diversified

Send a message to Ruth Awolola