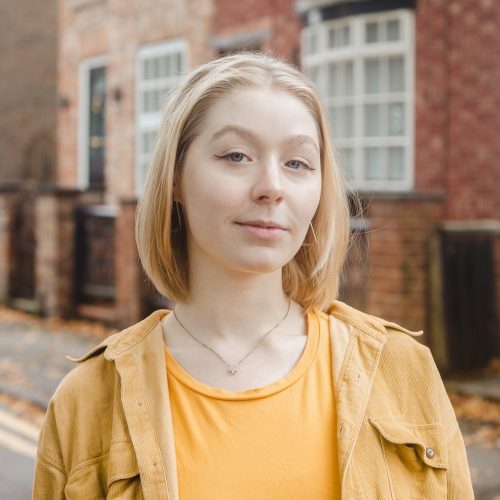 Libby is a writer, creative facilitator and producer based in Manchester. She co-founded the company L Squared Theatre, which will tour her sci-fi comedy play ‘Far Out’ in 2023 (starting at VAULT Festival London in February). She also facilitates writing workshops with organisations including George House Trust and Whitworth Locke, and tours as the VR Facilitator/show host for Leo and Hyde’s VR musical ‘Double Life’.

Libby spent two years as the Producer for Plaster Cast Theatre (“the benchmark that all young theatre companies should aim for” Edinburgh49) which toured their Offie-winning trans physical theatre show Sound Cistem to Edinburgh Festival Fringe, VAULT and HOME Manchester among others in 2019/2020.  She was also writer with Plaster Cast Theatre for HOME Manchester’s ‘Staying Home’ lockdown project; creating an original, interactive fictional universe for participants through handwritten letters.

She was one of the BBCs Manchester Monologue winners in 2018,  and directed the devised immersive play ‘Barred’ for Greater Manchester Fringe 2019 (****North West End).

Her other work includes acting as Assistant Producer for Manchester City of Literature’s Festival of Libraries 2022, and Manchester Coordinator for the LGBTQ+ children’s book writing project ‘The Rainbow Library’.

Send a message to Libby Williamson