HIGH CHAIRS LOW PRICES: EVERYTHING YOU NEED TO KNOW ABOUT NEWCASTLE’S FAVOURITE MARKET

For my journalistic debut, I’ve made it my mission to go and explore Grainger Market, a palace for the senses, a place where dreams come true and a vendor of ‘dead cheap’ chicken. In doing so I am reminded of the first year of my drama course in which we were told to ‘explore’ the Gateshead interchange for a site-specific performance. We went to Greggs and explored the pasties very thoroughly.  In order to conduct vital research on Grainger market, going for a cup of tea is a must.

I sit in Wi-Fri’, a chippy-style restaurant with high chairs and low prices, with my cup of tea and a chocolate flapjack, a bargain at just £1.50. 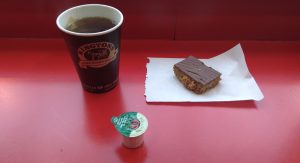 The flapjack is small, but if that’s issue you can always buy two. The tea is none other than ‘Rington’s’ – a tea manufacturing company based in Newcastle, which reminds me of home as we used to have a Rington’s man come around our way selling door-to-door. I had made it my year-long challenge to pull him, but I never quite did.

To the right of me two middle aged women are chatting: “She never stops eating. Even after she’s had dinner she keeps on eating.” The same woman goes on to talk about how she didn’t receive any presents for her birthday, which I don’t think this is surprising as she’s critiquing other people’s eating habits whilst stuffing her face with a massive pie. To the left of me two men are being highly inaudible which is most unhelpful, but I’m sure what they’re saying is very interesting. I set up my Go-Pro (which is evidence that I am now a fully qualified journalist) to film people walking past which will no doubt be part of a tasteful film montage at the end of this article. 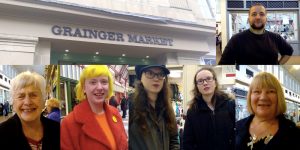 I’m no stranger to Grainger Market. I’ve been in many of the shops, but definitely not enough of them. Just yesterday I was here buying food in. As a student it’s really important to make sure you’re eating properly and cooking, unlike one of my lecturers who said just the other day that when he was at university he ‘put an egg in the microwave, it exploded, and he never cooked again’. It’s far too easy to put weight on, especially during your first year. It doesn’t have to be expensive either, with three freezer packs of meat from Finlay’s Quality Butchers for just £5. 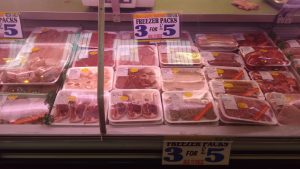 This trumps Morrison’s 3 for £10, which is only useful if you’re wanting a whole chicken which let’s face it, unless you’re working for Nandos, you’re probably not.

Grainger is also the best place to buy fresh fruit and vegetables. My two favourite fruit and veg shops are T.E Liddell and Hutchkinsons. Both of these places do bags of lemons for just a pound with Hutchkinsons also selling lemons separately for 30p. When life doesn’t give you lemons, at least you know where to buy them if lemons is what you wanted from life.

One of my favourite shops ‘Sausology’ is closed which is such a shame. I was looking forward to asking the man about his sausage.

Grainger Market doesn’t just have food shops, oh no no. It’s also home to possibly the best shoe shop in the UK or maybe the world. I am talking about ‘Scorpio’, which deals in Doc Martens. 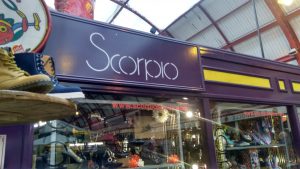 The best place to find a Doc Marten bargain is on the little tables outside the shop, provided they have them in your size. Many a time have I got excited about a pair of Doc Martens only to find they were only available in a size four, but I live in hope. 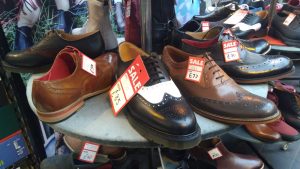 After having a good wander around and a chat with some locals and market traders, I decide to finish the day off with a tuna melt at ‘The Coffee Lounge’. 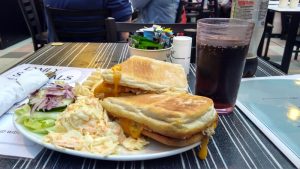 Beware, many of the stalls and cafes don’t take card payments, including this one, so make sure you visit an ATM beforehand. The nearest one is the one attached to Tesco, out of the back entrance and to the left.

So, don’t be a stranger, whether you are getting a key cut, grabbing a bargain or just people watching, make sure you visit Grainger market for a truly authentic Geordie shopping experience.