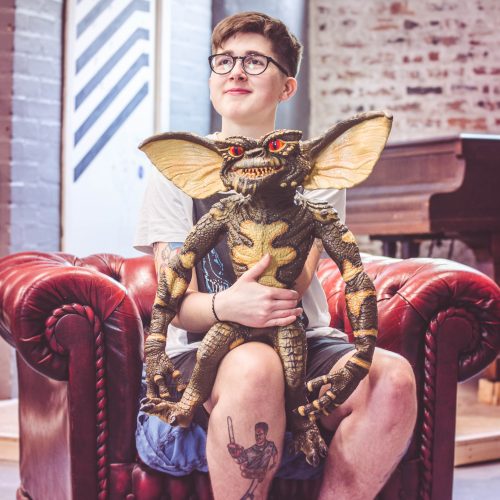 Melody J Sproates is a trans / non-binary theatre maker, playwright, lip sycner, facilitator and cabaret performer from Newcastle. They make challenging and sometimes daft work to help represent the underrepresented and advocate positive well being for the LGBTQIA+ community.

With a passion for all things queer, funny and spooky, they make work influenced by pop culture, comedy, horror, music, 80s cartoons and trans/non-binary experiences. Their work is playful, educational, cut and stick, silly and raw, often about their own personal experiences of identity and gender.

Melody graduated from Northumbria University with a Drama and Scriptwriting degree in 2018, and was the winner of Live Theatre’s New Writing Prize in the same year. They have since worked on theatre shows such as Raising Shame (BRASH),  ReTake ReMake (The Lawnmowers) and their short solo performance You are who you choose to be, which was the winner of the Curious Arts Queer Itch bursary, and went on to tour with The Camden People's theatre, PUG and Northern Pride.

In 2019 Melody debuted their solo show *gender not included, a one person non-binary cabaret performance explores gender identity, self-discovery and acceptance told entirely through lip-sync (Supported by Curious Arts Festival and The Arts Council England). They toured the show to venues such as ARC Stockton,  Northern Stage and VAULT Festival.

As well as performing, Melody has had their plays Cracked Ribs and You can Talk to me staged at venues such as Alphabetti Theatre and Live Theatre, and they were made a recipient of the BFI Film Hub North's Script lab programme Scratch me. They also write and perform comedy poetry, and have performed at nights such as FLIM NITE, BonBons Cabaret and are a part of the cringey comedy duo Sowersprouts.

Send a message to Melody Sproates