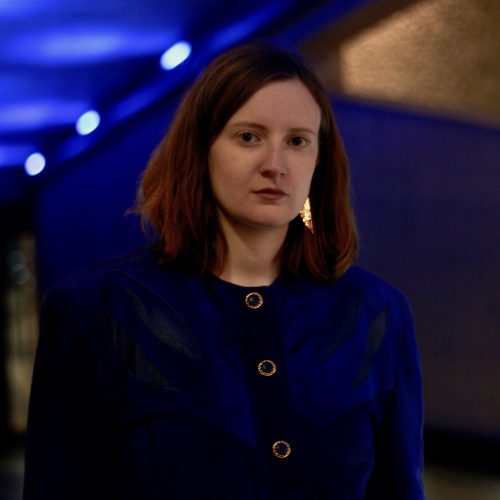 Katie Byford is a poet and filmmaker living in London. She is a Barbican Young Poet alumna and has performed her work at the Houses of Parliament, the Barbican Centre and at Durham Castle alongside a full orchestra. A Classics graduate, Katie was this year invited back to Durham to give a guest lecture for the Classics department on the reception of ancient literature and themes in her poetry. She continues to run Thorn, an independent arts platform in the city going into its fifth year.

Katie’s poetry has been included in anthologies published by Bloodaxe Books (Hallelujah for 50ft Women) and Macmillan UK (She Is Fierce: Brave, bold & beautiful poems by women), along with journals Magma and Popshot. Past commissions include the Wellcome Collection, South Bank University’s Borough Road Gallery and the Horniman Museum. Katie is currently being commissioned by the Barbican to write poetry in response to their major summer exhibition Lee Krasner: Living Colour, and recently delivered poetry workshops as part of the opening of AI: More than Human at the Barbican’s Curve Gallery.

A short Katie produced, Tea with Lemon, was awarded a British Film Council grant to fund her travel to Flickerfest, an Oscar-qualifying film festival in Sydney in January 2019, after it was selected for screening. Katie’s first short film project as writer/director, about life after sexual assault, is due to shoot in September.

Odysseus/Penelope (for soprano and piano)

Send a message to Katie Byford