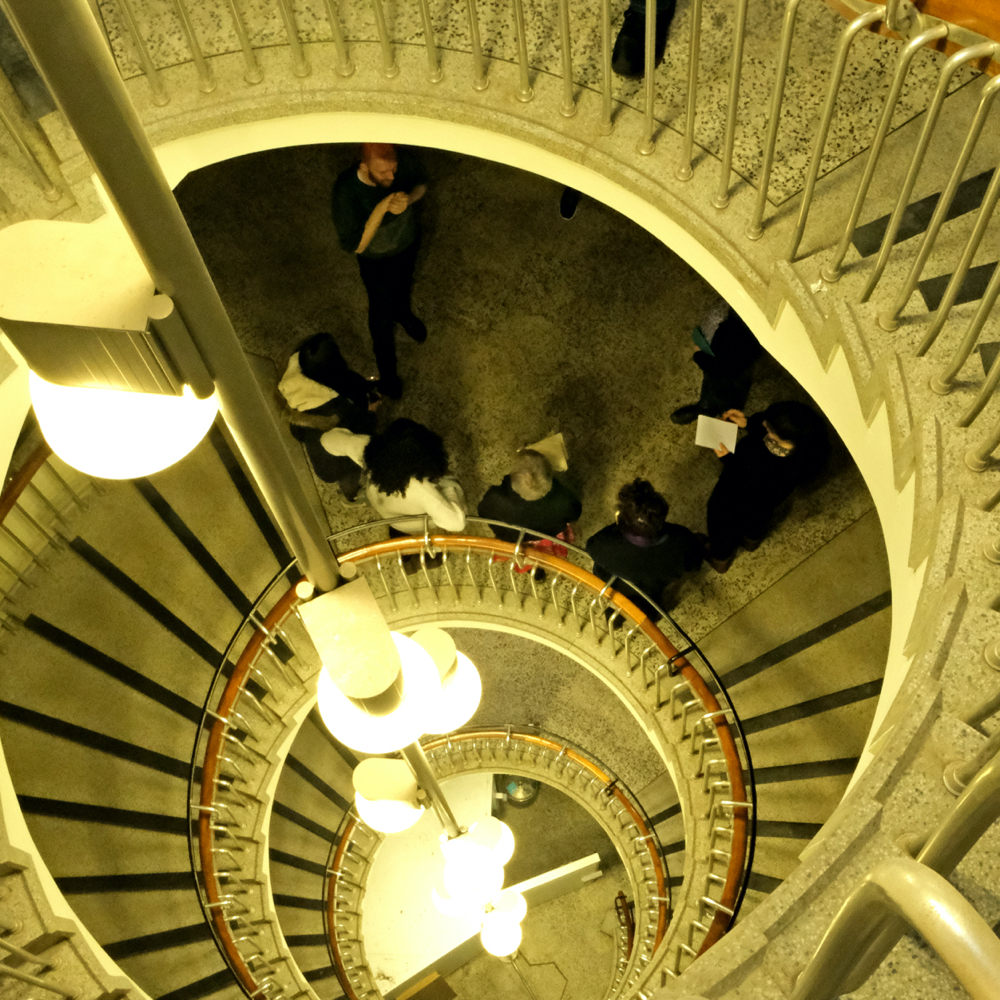 We are in the middle of our new year series of Squad Day workshops, which started off with two open to any of the 211 writers we have worked with since 2001. The first led by poet Helen Mort was How to Write a Building in which we wandered round and sought inspiration from the old Sheffield Co-op building which is now Kommune/Kollider/Kurious Arts. You can see a short film Kurious made about the day here.

That was followed by a day led by our Director Steve Dearden and Manchester Poetry Library Director Becky Swain. We held the workshop in Manchester Metropolitan University looking across at where the new library is being built. Visible/Invisible Libraries explored how perhaps the best libraries are constructs we imagine and carry in our heads, and how this kind of thinking might influence the curation and ordering of a physical library.

We always love it when Squad grads come back tom lead workshops and, in a Newcastle day primarily for our current cohort, Hannah Burdett took us through the way narratives branch, diverge, converge in games making. Ideally equipped to deliver this, after doing a masters in game design at the National School of Film and Television, Hannah is now working as a Producer for PlayStation.

Occasionally we deliver workshops with partners, and having a hot spot of poets in Durham, we partnered Durham University Poetry Society to put on a workshop by Sinéad Morrissey on the self in poetry, about both how to write from the self and how to write poems unfold outside the self.

Members of our Core Team also lead workshops, Emma Adams led a Leeds day On Finishing aimed mainly at scriptwriters – though a novelist and a poet attended too. We started with Emma passing on some of her own experience and the thinking she had found useful to get over the real and imagined blocks we all experience as writers. But for much of the time Squad writers shared the barriers that stopped them finishing – or knowing they had finished – and coming up with shared strategies to overcome them.

Up and coming are a day making giant Letterpress artworks with poet Antony Dunn and designer Oil Bentley; then a checklist session on everything you need to have in a submission to an agent before you press SEND, led by agent Jenny Savill of Andrew Nurnberg Associates; and finally Getting There, our regular end of programme workshop with Producer Emma Beverley, when we take a step back from writing and look at how we set professional and personal goals, and how we measure our progress towards them.

But in a way our programme never ends. While we are concentrating mainly on recruiting Squad 10, we do have a few other workshops in the pipeline, including a Yorkshire Dance collaboration offering writers the chance to play creating new dance-word pieces with choreographers, this will be led by poet Kayo Chingonyi and choreographer Ella Esma; and also in May we’ve booked a session led by Bronwen Simpson Director of Stockport Hat Museum, where we will make hats that incorporate text.