THE BIG ISSUE – BUT NO ONE’S LISTENING 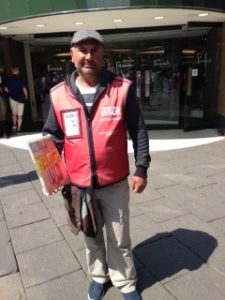 On a busy afternoon in Newcastle City Centre, Vasile is surrounded by shoppers- unfortunately ‘The Big Issue’ magazine isn’t on many people’s list. Originally from Romania, Vasile came here with his wife and 13-year-old son five years ago, but his lack of English has been a barrier to any regular employment.

“I go to the job centre every week,” he said. “I say give me one job, anything anything. But my English is bad so I find nothing. But I will do anything, I can pick up the rubbish from the streets, you don’t need English for that.”

Vasile is one of a 430 people recorded living in the North East without fixed accommodation. Back in Romania he worked as a driver, a stable job that supported his family, now his only income are the magazines he sells. ‘Today so far I sell two, on a good week I sell twenty. But sometimes you lose money because you buy more than you sell.’

On this street, Vasile is largely ignored by the masses of shoppers passing by, very few acknowledge him and even fewer stop to actually buy the magazine. It’s certainly not enough to support him and his young family, but without the English language, it’s the only option he’s got.

A few streets down, it’s the same story for Simon. He stands not far from Central Station, but despite the many people travelling in and out of the station, no one stops to buy the magazine.

He said: “I can’t speak English so this is what I do. It is very bad.”

Simon was originally born in Hungary and moved to the UK recently with his wife and children. He came to England to find better employment but without a good level of English so far this is the best he can find. “At Christmas time it is much better, people stop and give you money,” he said. “The rest of the year is bad, you sell nothing.”

Even if they had knowledge of the language, Vasile and Simon are fighting for jobs in a city with high unemployment and a slowly recovering economy. With homelessness predicted to rise by 26 per cent in the next four years in the UK, the future isn’t looking any brighter for these two sellers. Despite everything Simon remains hopeful: “Maybe my English will get better and I will find something different.”

Maybe he will, but for the moment all Vasile and Simon can do is continue selling and hope people will pay attention to The Big Issue.