THE MINDS BENEATH THE SIGNS 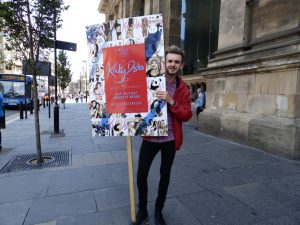 Luke – Kinky Disco at the Tup Tup Palace.
Luke, 18, has recently been made Tup Tups’ promotional manager and is saving money to go to Zante next month. When asked if he can think of an interesting fact about himself, Luke reveals that his cousin is Kyle from ‘Geordie Shore.’ Small world, Newcastle… 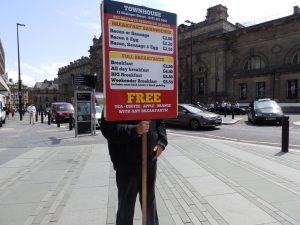 Kayne – Townhouse Cafe
Kayne, 16, has been holding his sign since 8 o’clock this morning. Straight away his accent gives him away – no Geordie blood in his veins. He tells us his family has recently made plans to move back down to London and Kayne hopes to find a career working as an electrician. ‘I don’t get paid enough to save,’ he explains, ‘and I’d only waste it anyway.’

Adam – Pure Ink
Adam, 16, isn’t actually employed to hold this sign for Pure Ink tattoo and piercing parlour. He’s standing in for a friend who’s gone on holiday. We praised him for such a selfless act of friendship and then he confessed, ‘I might keep it actually. Money is money, y’know.’ Adam, you truly are a top mate. 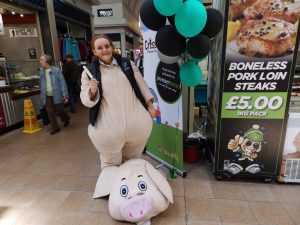 Kathryn – Premier Meats
Kathryn, 17, is saving for driving lessons and eventually a car. Yes, she hates wearing the pig outfit. Her shift is from 10 til 5. In the heat of summer it is torture, which is why, after forgetting to take her photograph during the interview, we find her devouring an ice lolly back at Premier Meats, where you can pick up boneless pork loin stakes for £5 a kilo.

‘This job’s good because you don’t need any experience. I’ve been manhandled in the street. People have popped my balloons before. And a little boy jumped on my back. Just jumped on me! I was like, Hello!? There’s a person in here, you know!’ 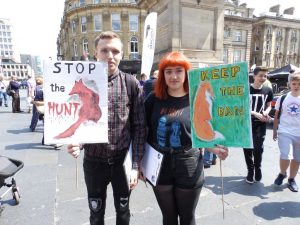 Jasmine and Francis – ‘North East Animal Defence League’
Beneath Grey’s Monument, Jasmine (16) and Francis (19) stand with their homemade signs, petitioning against the changes to the fox-hunting ban.

F – ‘Basically, instead of changing the whole bill to make it legal to hunt foxes, they’re making changes to it. So if the bill passes you can use as many dogs to chase the fox but they’re not allowed to kill it. How?! Once the dogs get the fox they’re not going to be able to stop. We’re getting signatures so we can contact the MPs and persuade them to vote against the changes.’

F – ‘We’re with an animal rights group that we started, The North East Animal Defence League.’

J – ‘We have a few vegetarian and vegan friends and we just decided to start something. We’re both vegan ourselves so animal rights is something we’re passionate about.’ 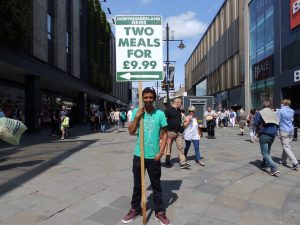 Louis – Northumberland Arms
Louis, 22 and with headphones, is a vision of calm in the continuous bustle of Northumberland Street. Apparently, the regular sign holder didn’t show up today.

‘I’m usually working on the bar. It’s good crack. It’s better than working in a club. Too many late nights, you don’t get much of a social life.’

We ask about him about the city. He states, simply, ‘I’ve lived here all my life. Born and raised.’

‘I’m saving, yeah. I wanna do South America. You have to be careful but there’s loads of lovely bits. Travelling’s just got to be done. You’ve got to experience the world.’ 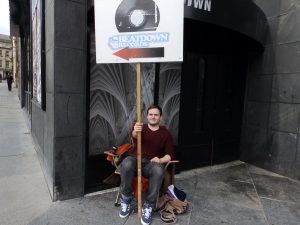 Connor – Beatdown Records
We were just about to grab our lunch when we spotted Connor, 19, across the street reading in a deck chair, keeping his sign upright by pinching it between his knees.

‘I’ve worked there since my first year of college. It’s been four years now.’

We ask about the chair.

We clock that he’s got the whole set up. Energy drink in hand, cup holder ready and waiting, and the book he was reading when we arrived, placed open at his feet.

‘It’s a biography of Julius Caesar. I studied Classics at college.’ He glances sheepishly at the sign. ‘Yeah, music isn’t a big interest of mine. I don’t have a set taste or anything… but I do own a record player.’