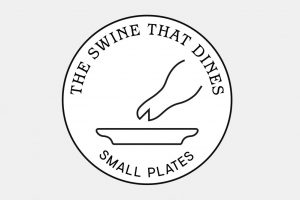 On the 14th & 15th May 2015 a select group of diners sat down in The Swine that Dines supper club for Cheese and Swine, a menu featuring five courses, five cheeses from cheesemonger George and Joseph and five poems by Writing Squad poets – all as part of the Leeds Indie Food festival.

Ever since George made his medicine

I’ve been dreaming of feeding people.

because angels ate it first. Some boys

brains, so we imagine zombies

in the clear, still liquid. This is how

I describe it: as though eating heaven.

This is how they make it: the clouds

beaten into cheese, the stars crushed

into croutons. I discover Marmite

kissing the man who worships it, then

on Sunday we eat his house together.

The body is a temple. We feel pregnant.

I break the bread with him. We break

the bed, the body, the microwave.

“Look at cows and horses; they have to eat all day

to stay alive.” My asparagus stalks boil in a saucepan,

bound in rope: hostages of my hunger. We all feel

tied down at times. I marinate mushrooms in a mix

about a salad.” I can taste the sugar in the air, leaves

steaming in the sauna of a saucepan, their shape

relaxing into the space. Understand, there is more

to salad than its wholesomeness; its greediness

for light. There is much in this world that nourishes

that isn’t a turkey sandwich. Even now, chopping

the watercress, I am full with all the words for love.

There is a shade of early called lavender

rolling down the climbing bannister of morning.

How long we waited for August’s up thrust:

long-fingered blooms nodding amongst themselves,

conducting the haze of sleep-sinking bumblebees.

Something ancient here in the shears, in the shape of

bent stalks, taking flowers from the base, pruning,

There is no such thing as a lonely summer:

Francophiles standing in blue fields with

our muddy feet, our perfumed mouths.

Let the calendar linger here, wallowing in the

Now, with the rafters and the hooks all occupied,

the house smells like warm things, drawing in and

taking folded jumpers out of storage.

He would know, gorged on cheese

at a Roman party.

All things grow in the Mediterranean basin

where Calypso watered celeriac in her garden:

thirsty stalks, waiting to blossom and

Calypso was not myth.

the vegetable shavings left on the counter

for wandering warriors and classical poets

We have come out on her anniversary,

I couldn’t let him sit, going through her things,

cups of tea going cold besides him.

So, I have taken him out for dinner, filled him

with fritters and purees and consommé,

with ravioli and asparagus and mushrooms,

She might as well be sitting at the table with us,

I’m surprised the waiters haven’t laid a place for her.

We order Muttabaq, wanting the sweetness of honey

and the comfort of soft cheese. I’m wearing

his diamond ring, we’ll pay on the joint account,

but as I break into each filo parcel, it feels like robbery.