THESE 4 ARE ORIGINAL DRAWINGS

Take a stroll through Manchester city centre any given weekend, and you’re likely to pass a street artist. 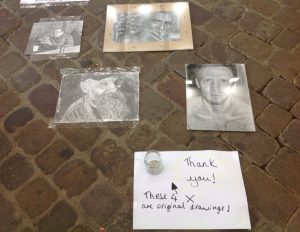 But how much do you know about the person behind the drawings?

Is a passion being fulfilled, or is it someone trying to scrape a living?

For Rebekah Williams it’s both.

The 20-year-old has been sketching from a young age and exhibits her work outside  the Arndale Centre.

“It’s silly to draw at home when I can make money here. I can’t get a full time job because I have ME (Myalgic Encephalomyelitis) and I don’t like authority,” she said.

As an artist Rebekah has been inspired by celebrities, homelessness and her boyfriend.

Although she considers herself as a street artist, displaying her work to shoppers and city centre workers, Rebekah also relies on social media.

She said: “If I didn’t have Facebook I would really struggle.I have been noticed by other artists and gained opportunities by my online presence.”

The Manchester-based artist, originally from Morecambe, has also featured in a music video but prioritises her sketching as she finds it therapeutic.

She also has plans to collaborate with another artist she met via Facebook, in a project due to begin in May.

Until then she is happy to count the coins collected in her donation tin – and wax lyrical with strangers about the work that offers her a lifeline. 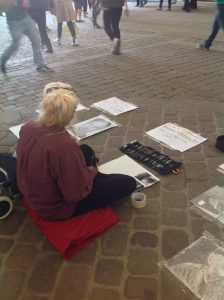