A sin, a right or something to offset scandal? We talked to people on the streets of Manchester on the day that same sex marriage became law. 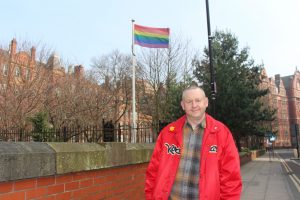 “A government ploy to offset the pensions black hole.” Paul Nyles, believes that gay couples tying the knot benefit the government and the government alone. “A married couple don’t get as much from two single people and that has been known for years,” he said.

He suspects that many of his friends, allured first by civil partnerships, may leap excitedly into full blown marriage only to separate as soon the party is over. He warned us of “vicious evil young people frogmarching older silly stupid people up the aisle so fast, and not getting a divorce, waiting for the inevitable to happen because they know they’re gonna get something”.

Paul added: “If it’s a loving relationship you don’t need rings on fingers.’ 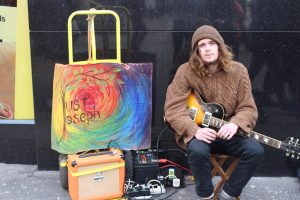 “If you’re gonna love someone you don’t need a ring or a massive party to say that you love them,” said street performer Just Joseph.

Not all of the people we chatted to on Canal Street were as cynical as Paul – happy couple Tracey and Pauline took a cheerier approach to the new legislation.

“After civil partnerships I am not sure I thought we would get equal marriage,” Tracey said.

She added that it was good to have their relationship equally recognised. 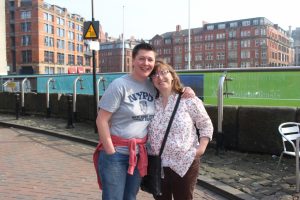 Yet one street preacher, who did not wish to be named, said love was not an emotion, but an action – and a sin if shared by same-sex couples.

“I don’t hate gay people – but I believe being gay is a choice. God didn’t create man and man to be together,” she said.

But for Tom Petrova, 21, the concept was simple.

He said: “As long as you are pledging your love for that one person in front of you that’s all that matters – it doesn’t matter if you’re marrying a woman or another man or a bit of both.”