The Fading Line Between Fiction and Reality on the Web

Outside the constraints of ink on paper, writing assumes a much more fluid shape. When we read stories in novels or magazines, we need to suspend our disbelief in order to immerse ourselves in the fiction. But the internet does not carry the same connotations of the thick safety of the bound book, or the glossy anthology. We do not associate the web with literature in the same way we perceive physical texts. Our disbelief moves further back in our mind. When blogs or websites start to develop into fantasies, it can even happen without us realising.

A few months ago, Charlie Brooker observed how the world of social networking had rather underhandedly transformed into a role-playing game. His argument revolved around the similarities between a generic video game and Twitter. Both involve creating a character loosely based around yourself, and acting out that avatar in order to gain points – or retweets and followers.

Into my mind comes images of Twitter personas such as the ever popular Queen_UK, who’s accumulated one million followers from his/her tweets from…well, wherever ‘Elizabeth Windsor’ actually tweets from. Of course, no one can mistake Queen_UK’s character for the royal figure she satirises. 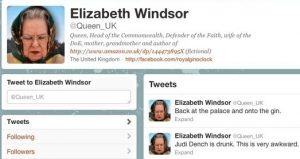 Equally, the antics of The Onion are rarely viewed as genuine, no matter how straight-faced its spoof news articles. That said, fiction is a spectrum, and these comedies tend to rest on an extreme end of it.

We recognise the likes of Queen_UK as fiction because of how ludicrous its premise is. But that’s just it. When websites involve more veiled satire, we might easily mistake the characters for real people. This is a phenomenon which could only ever have originated in the nebulous realm of the internet. Add elements of storytelling which we’ve always been more inclined to be taken in by – such as horror, or mystery – and the immersion can become almost absolute.

Ted the Caver is a famous example – a blog which starts out as a caving journal, evolves into a horror so gradually that by the time we realise what we’re reading, we still somehow feel inclined to take the story as fact. Eden Elddir throws you into the middle of things, but the comfortable format of the blog adds apparent authenticity to the conspiracy and enigma uncovered.

We find this alternate-reality fiction creeps into other mediums online, including video. The EverymanHYBRID YouTube channel begins as a fitness and lifestyle vlog, but the YouTubers start to be haunted by something paranormal. The characters destroy the fourth wall in an unprecedented way, often inviting viewers to help them figure out what’s happening, and even getting them to feature in future videos. Even more interestingly, they begin to introduce crossovers with other authors, setting their works within this distorted reality. 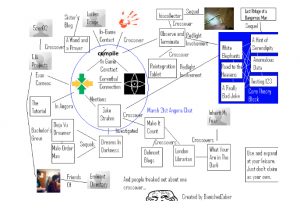 This diagram helpfully gives an impression of the sheer amount of content growing in the realm of internet fiction. Better yet, the diagram only displays a mere fraction of the amount of cross-pollination that this new brand of storytelling has spawned.

People already have began to take information from the internet with a pinch of salt. The popular maxim, ”On the internet, nobody knows you’re a dog” is ancient by web standards, having been produced in the dark ages of 1993. 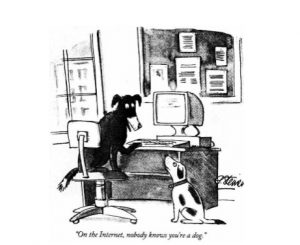 Nevertheless, as newspapers migrate to websites, and books to e-readers, the disorienting mixture of fact and fiction will become only more turbulent.

The line between fantasy and reality is already blurred in the intangible plane of the internet, and as more and more data is pooled into the web, the opportunities for reality to be bent will only increase. I can’t wait.