We thought we had lost these, so it was a surprise to find that you have already begun archiving the other things in our lives to contextualise our writing. 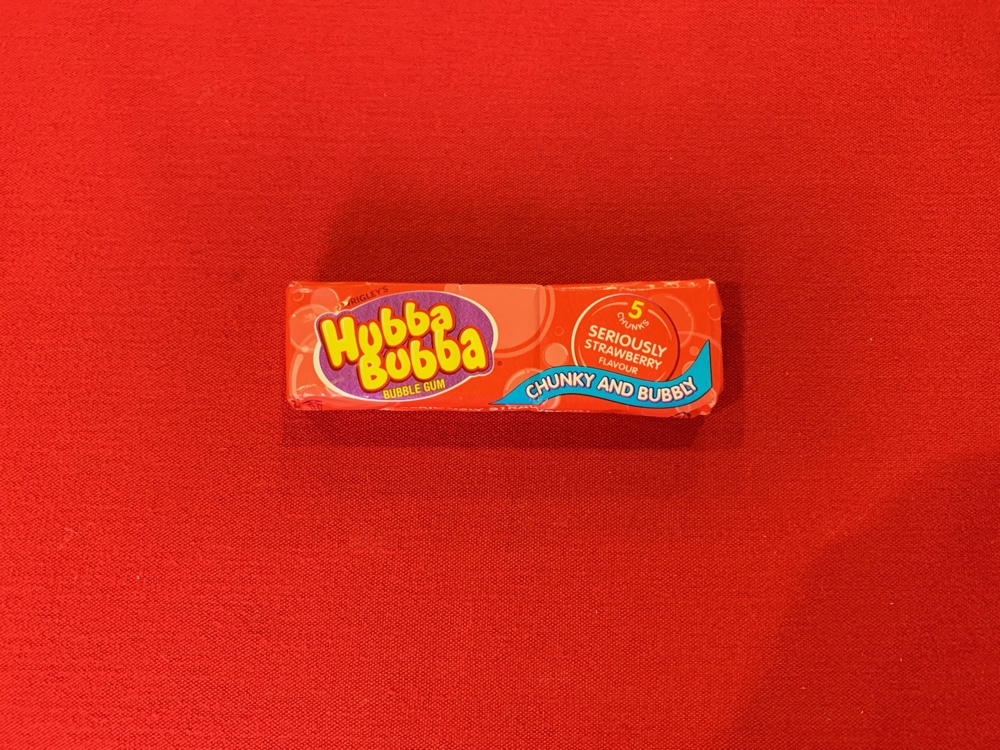 Hannah’s conditions means that she can’t eat or drink, but she can have a little chewing gum now and again. She only likes Strawberry Hubba Bubba, because others taste way too strong on a palate of nothing else! She has some chewing gum to cheer her up on a bad day, or simply to try and trick her stomach into stopping grumbling when she’s hungry. 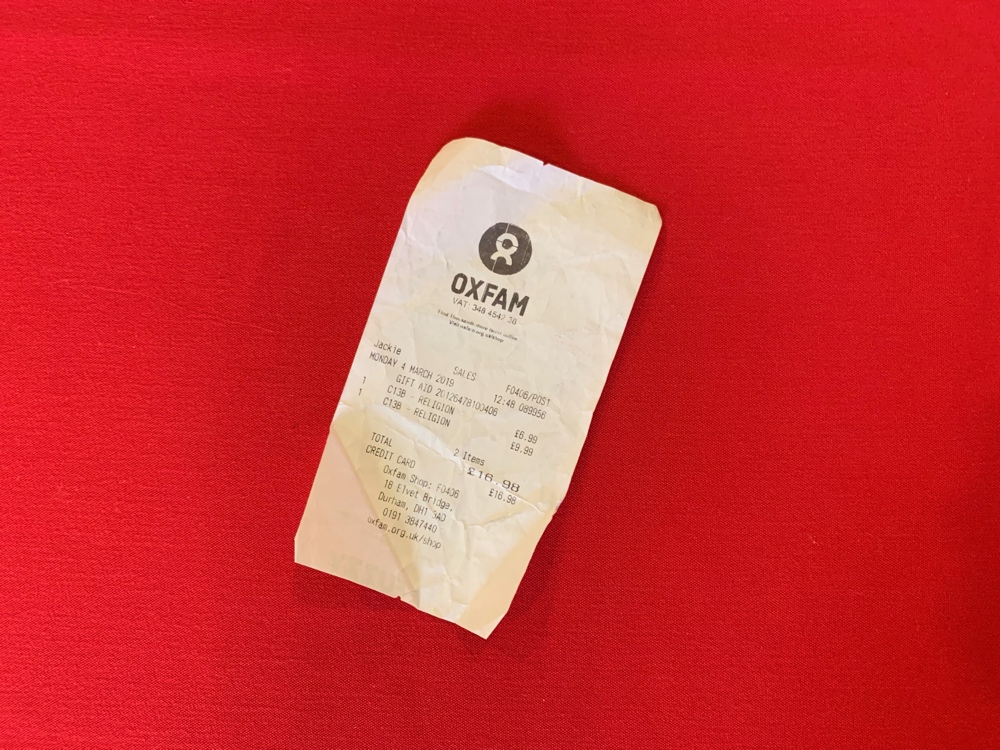 Prerana cannot walk by Oxfam without buying a couple of books despite her suffering bank balance. This Oxfam receipt has listed her poetry purchases as ‘C13B – Religion’ which may or may not be a metaphor. 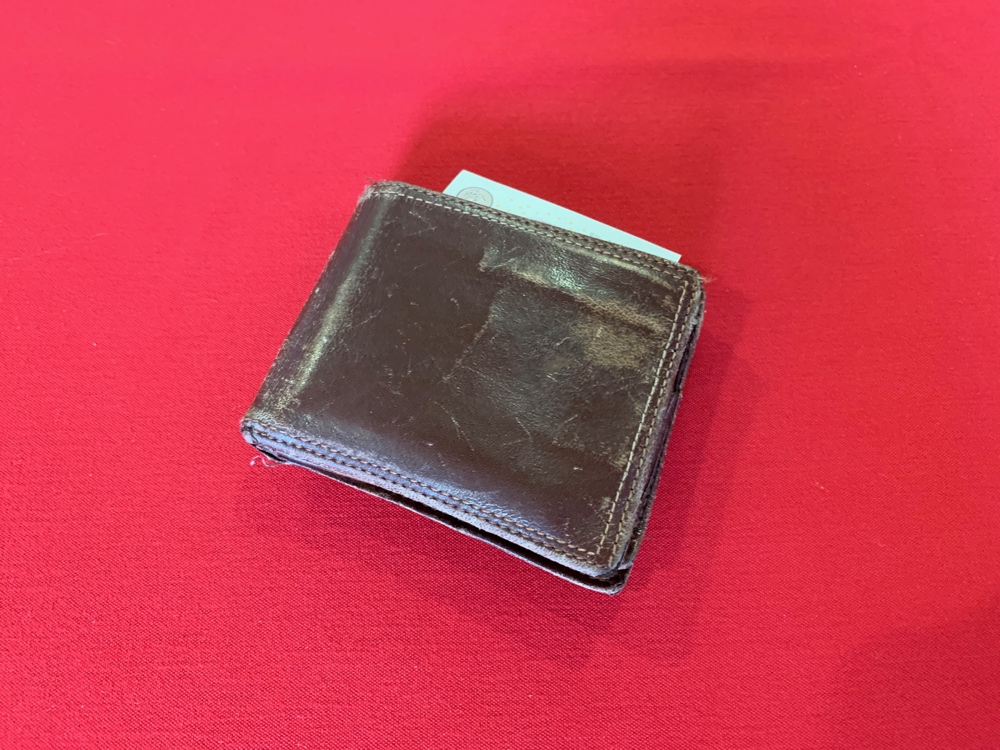 After her grandfather, who she’d been very close to, passed away suddenly last year, Isabella asked to keep something of his. She took his wallet because she can carry it with her all the time, and because it reminds her of him – particularly because he was quite clumsy and it makes her laugh that there’s a pocket with a hole in it that she can’t use, because things drop out. 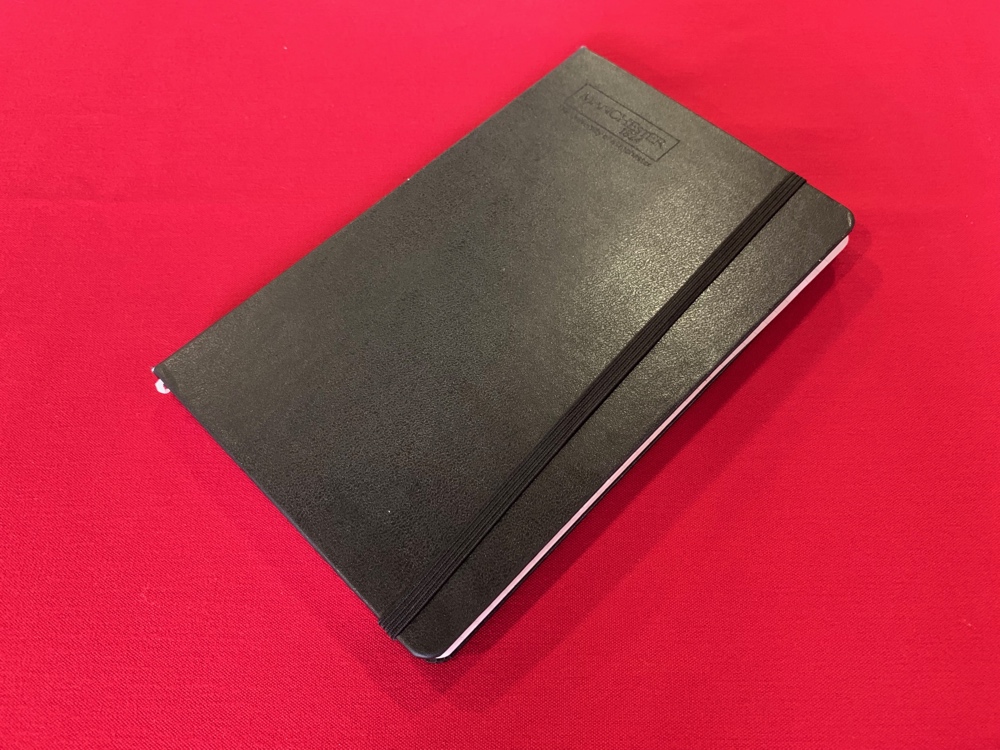 Isabella bought this to try and keep more concise records of things at university, because she has forgotten quite a lot already, and she’d like to look back on things as a whole, rather than on random scraps of paper. She uses it mainly for first drafts of poems and rough ideas, as well as journalling. 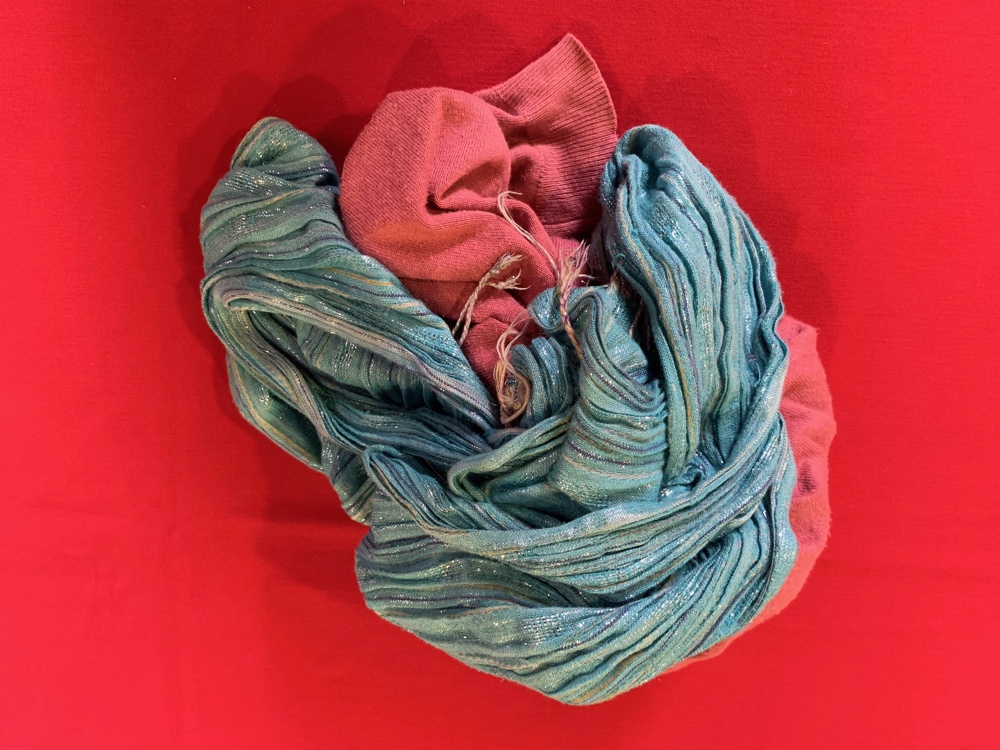 This salmon-coloured jumper and sky-blue scarf are regularly worn by Liz. Her unofficial cold-weather uniform, due to its regular appearance in her life, features in a number of poems she has written, and was worn during her first poetry slam.

Wear your salmon jumper, think of the

fish that can fall so far and survive, 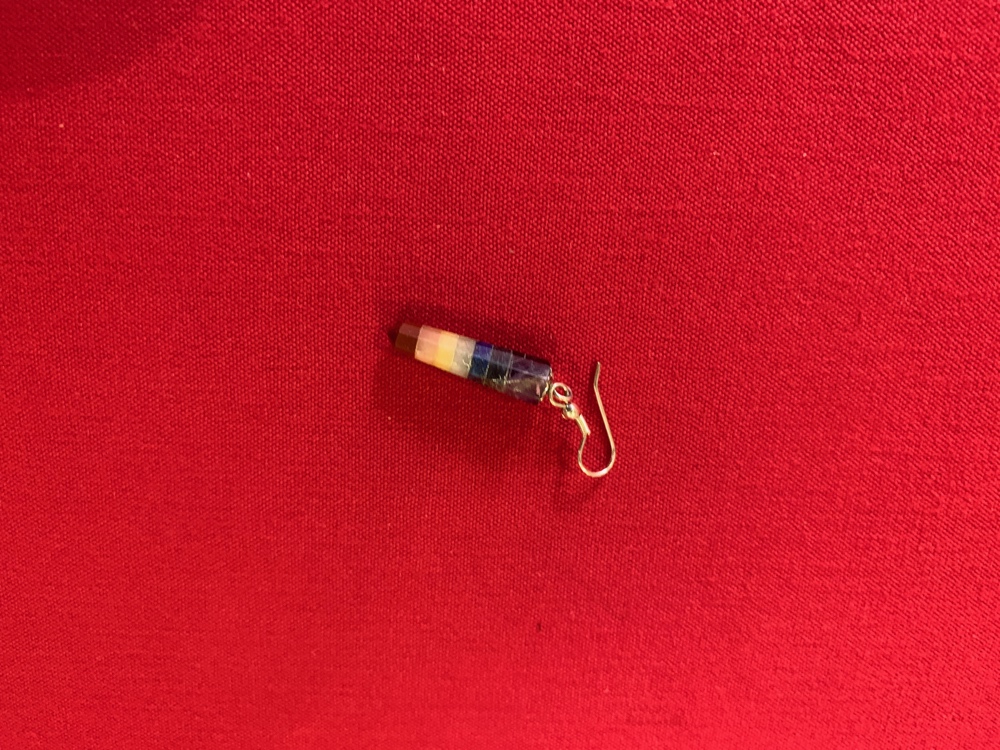 Origin: Black Market Minerals gift shop, Hilton Head Island, South Carolina. Object originally purchased to give Fielding the aura of a witch, though she confirms the earring has no known magical properties. Now ripe for being crafted into some other jewellery along with thirty-two other similar objects which have been gathering dust in a drawer for approximately eleven years. 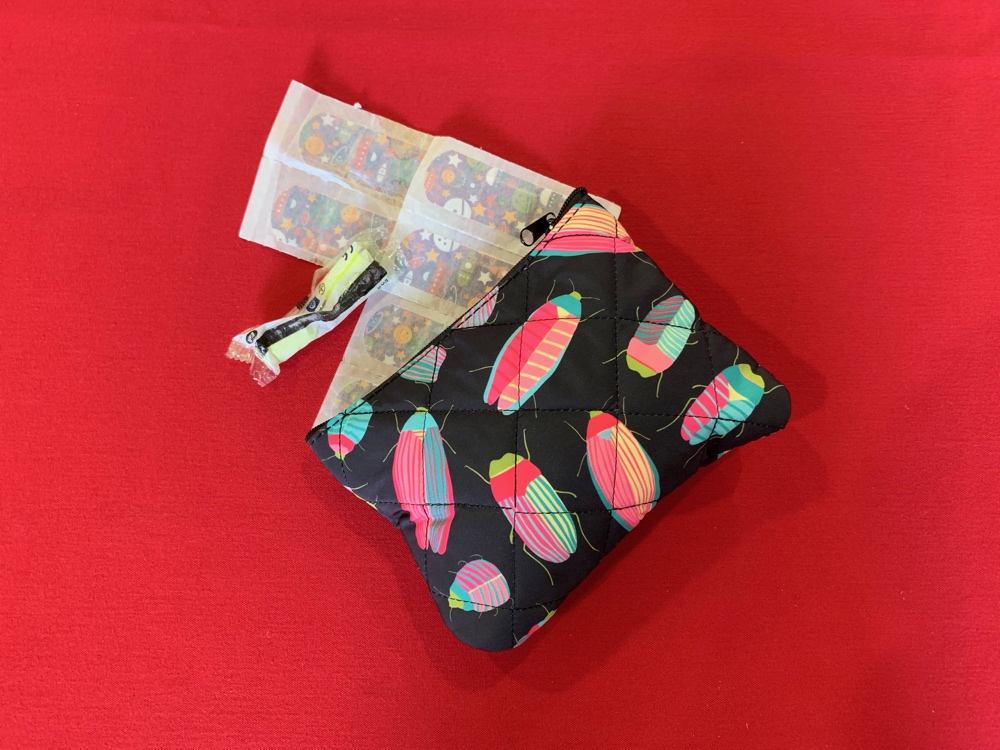 Items of note within: six space themed plasters (IKEA brand) and foam ear plugs (never used). Plasters doubtlessly regularly explained away as part of the trappings of being a primary school teacher, though Fielding would confidently wear the space plasters herself. Ear plugs leftover from the interim period in her long-term relationship when she was sleeping with her partner but not yet used to his snoring. 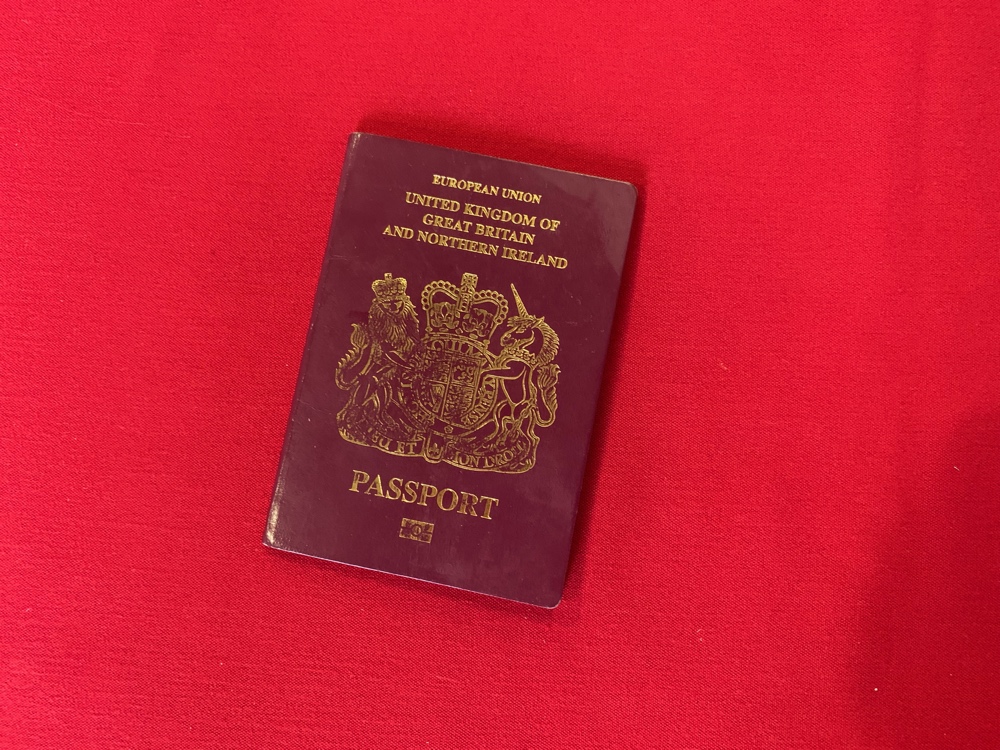 First received by Anthony for a planned trip to France in 2015 that was later cancelled because of the Paris Bombings. The interview for this passport being the day after the Paris bombings themselves. 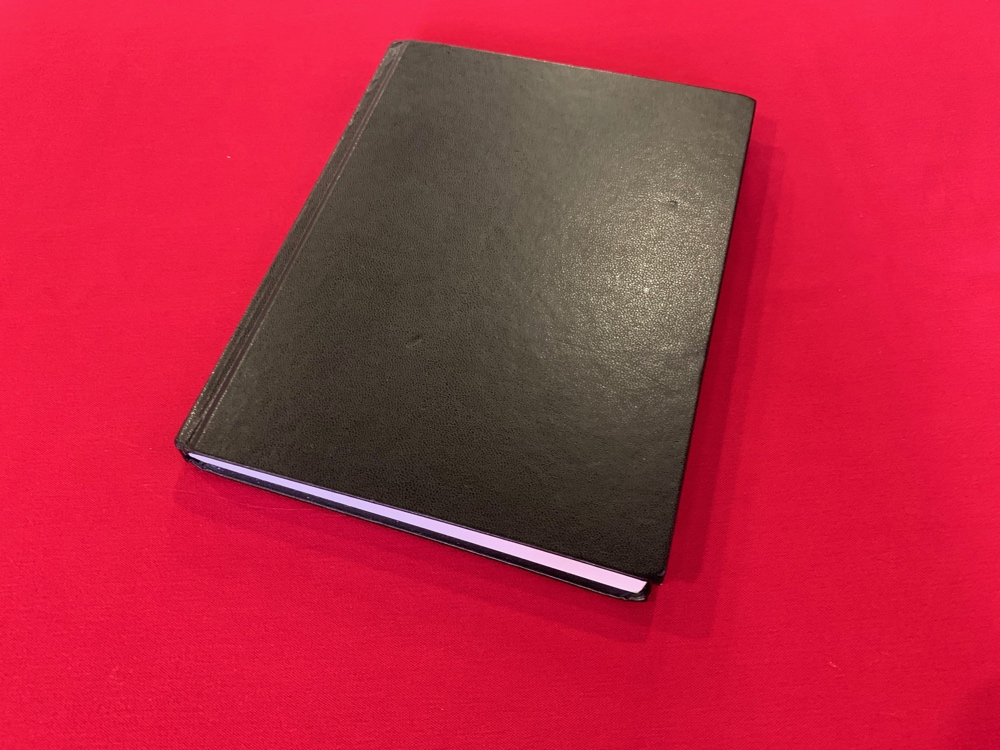 One of several used by Anthony to record ideas and observations. This one is a gaming notebook. 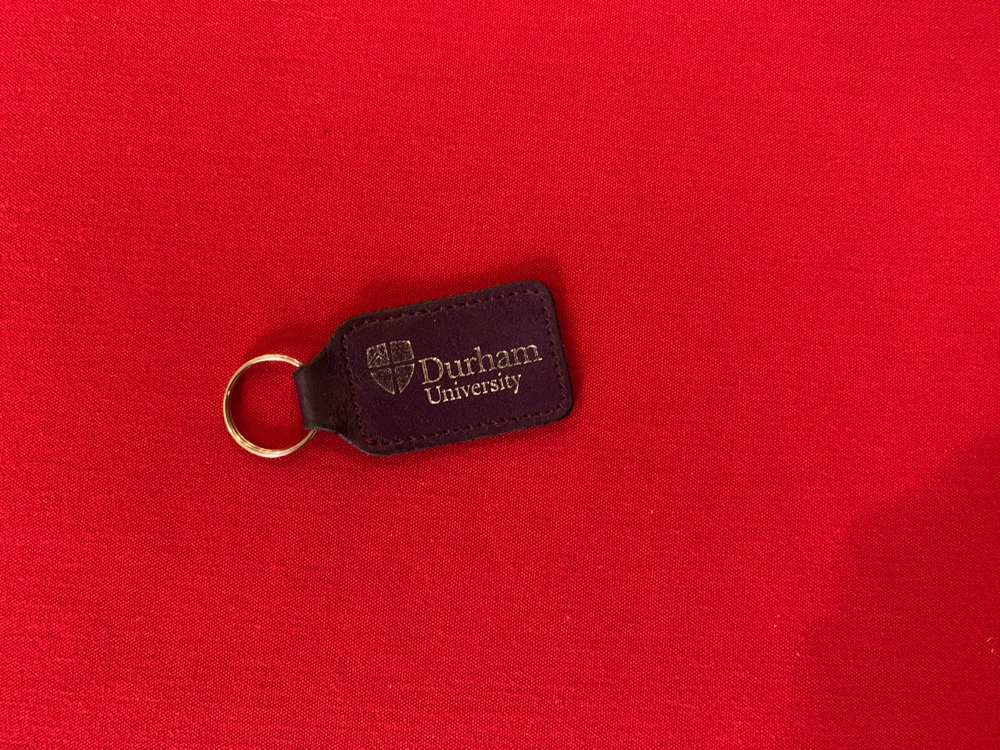 Given to Alice when her older sister first went to university, this key ring is rather battered from its time spent on a set of keys. It remained on the key chain in York for a while, serving as a reminder of the times in Alice’s first year, when she would travel up to Durham to visit her sister. 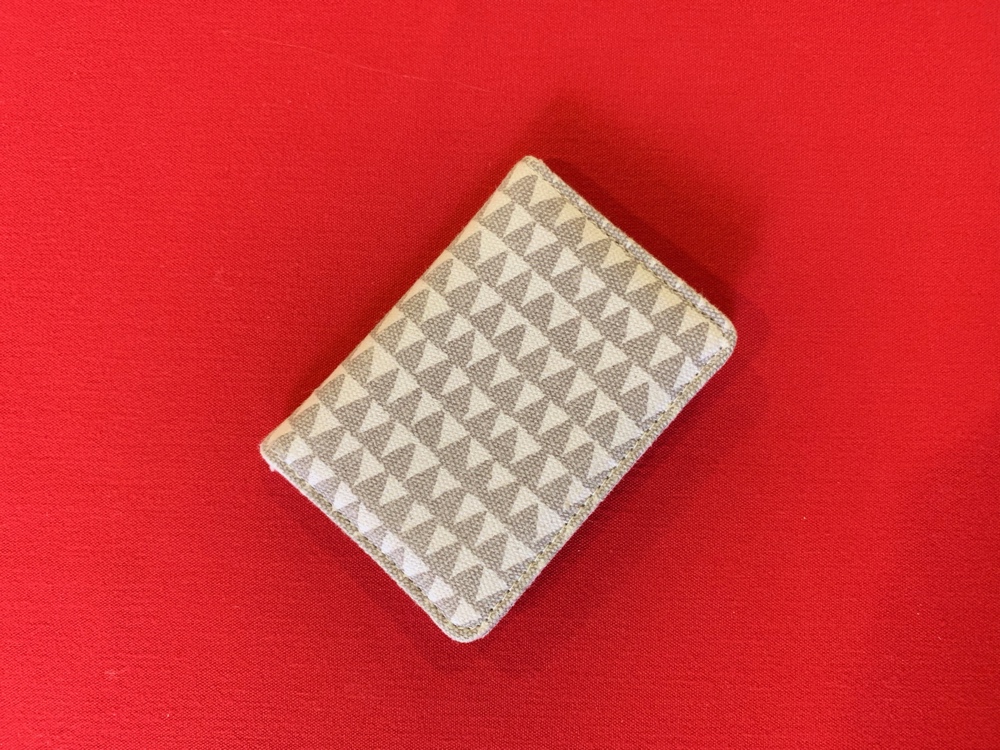 This has accompanied Alice on many journeys across the UK, as trains are her usual mode of transport, and has even made an accidental trip to Sweden when she visited Stockholm. 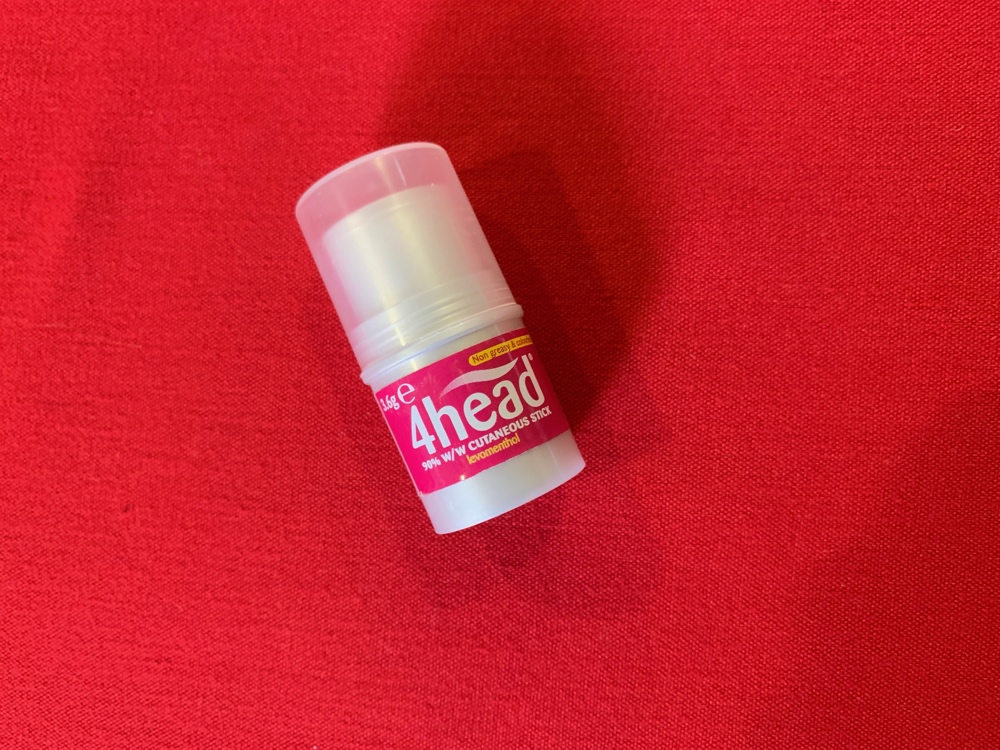 Spending long hours hunched over a glaring screen tends not to do wonders for the migraine sufferer. Aoife used menthol gel across her forehead and neck almost daily, to help her through more than one university lecture, bookshop shift and fast-approaching deadline. 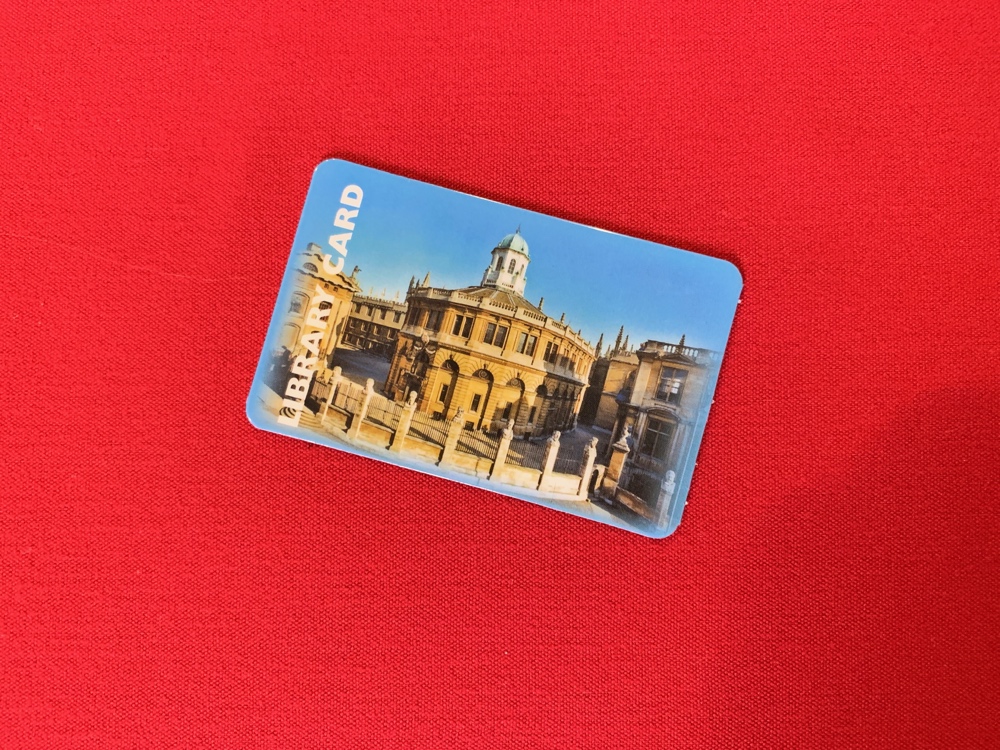 Integral for the procurement of regular reading material, this library card is also a love-letter to free public spaces into which everyone is welcome. Aoife has been a member of five different county libraries over her life so far and hopes these cards, which give everybody access to a wealth of words, do not become relics of the past. 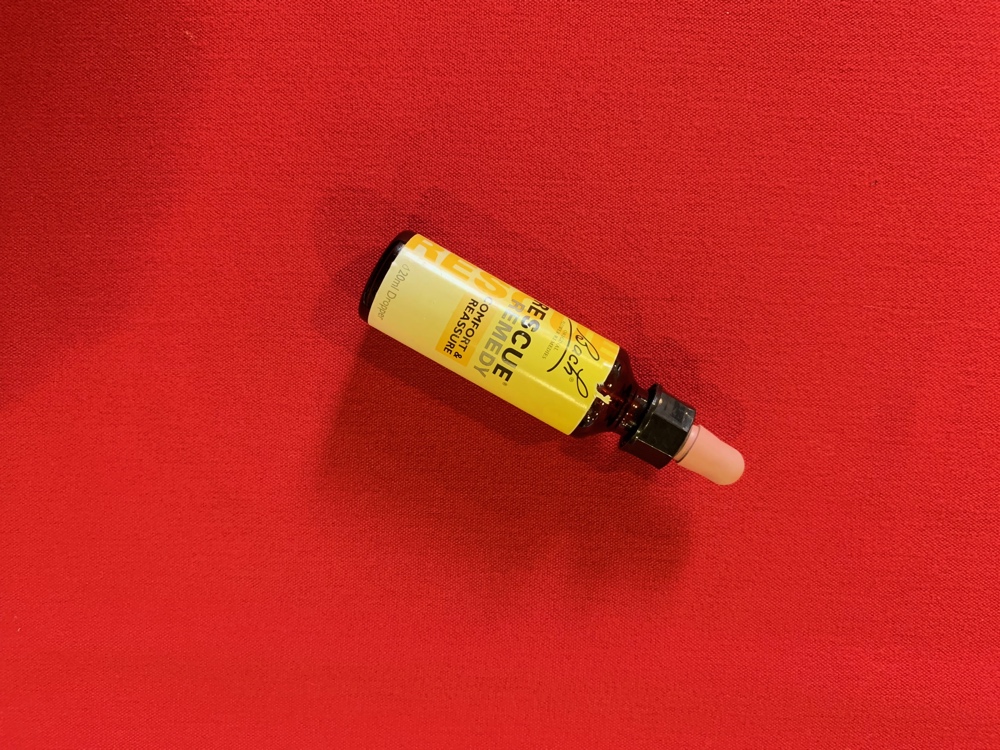 Alice bought this herbal remedy on recommendation of her mother, Kathryn Hiley, after a period of prolonged sleepless nights while studying at Lancaster University in 2018. She began to use the drops again during her first month working at Northern School of Contemporary Dance, in order to cure symptoms including heart palpitations, trembling hands, and stomach cramps. 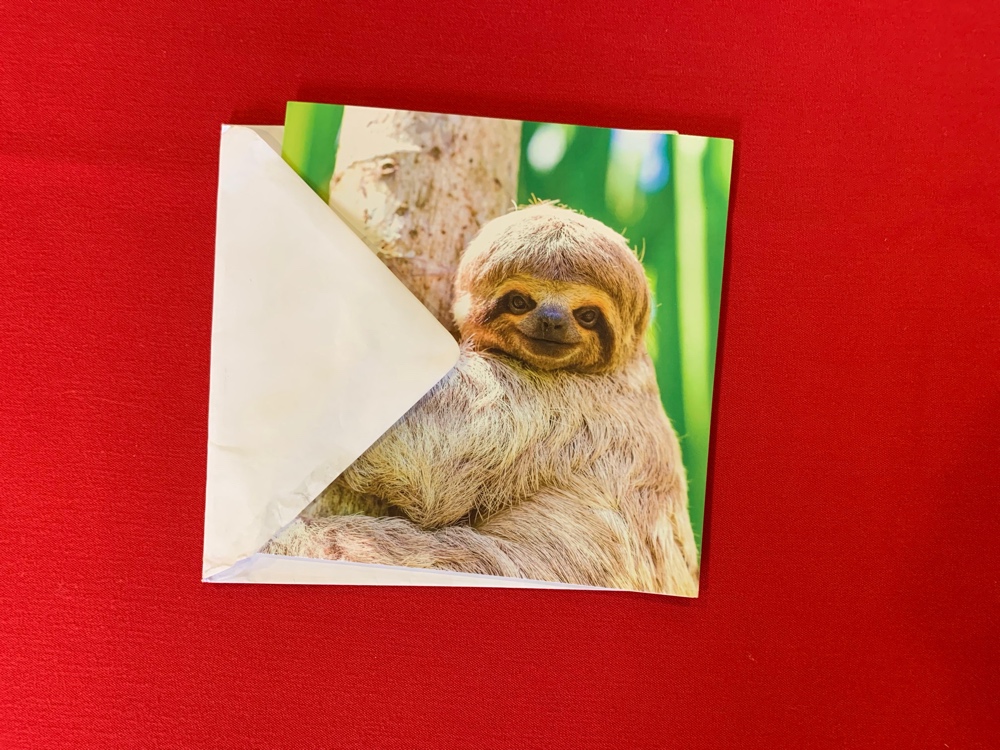 Alice became friends with media speaker and charity ambassador Rose Anne Evans when the pair were just 13 years old. The front of this 22nd birthday card depicts a sloth, a deliberate reference to their love of the character Flash from Disney’s Zootopia. Inside, Rose Anne describes Alice as a “good egg”, a phrase frequently used by her friends. 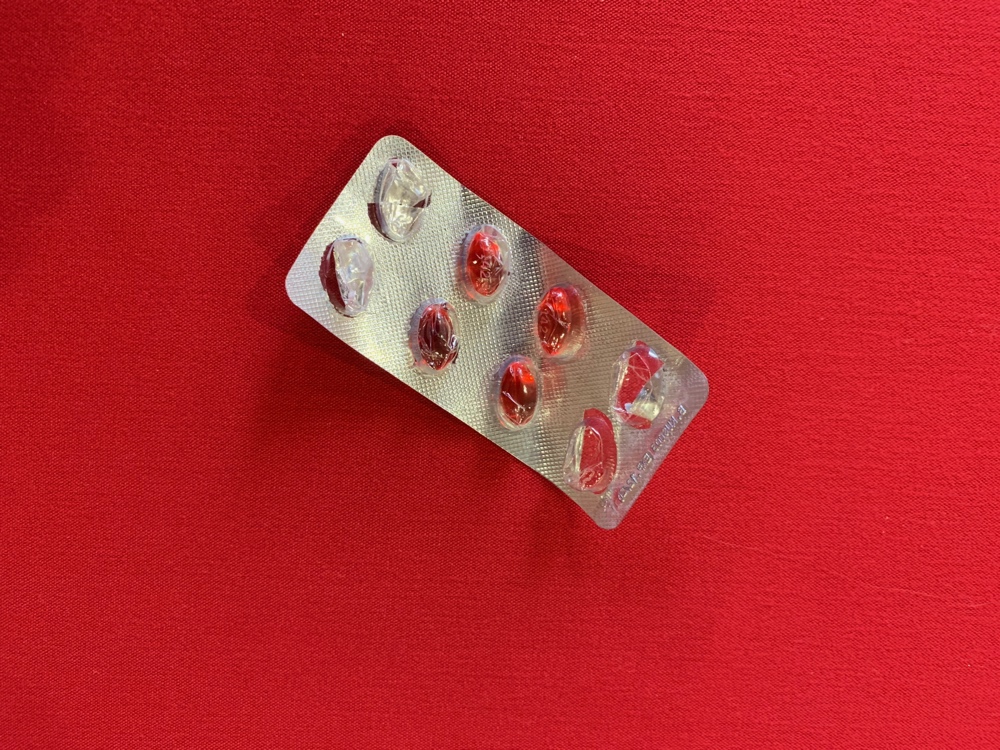 Prerana has these handy to deal with her frequent headaches caused by her midnight walks and a.m writing sessions. She is yet to establish a stable sleeping pattern. 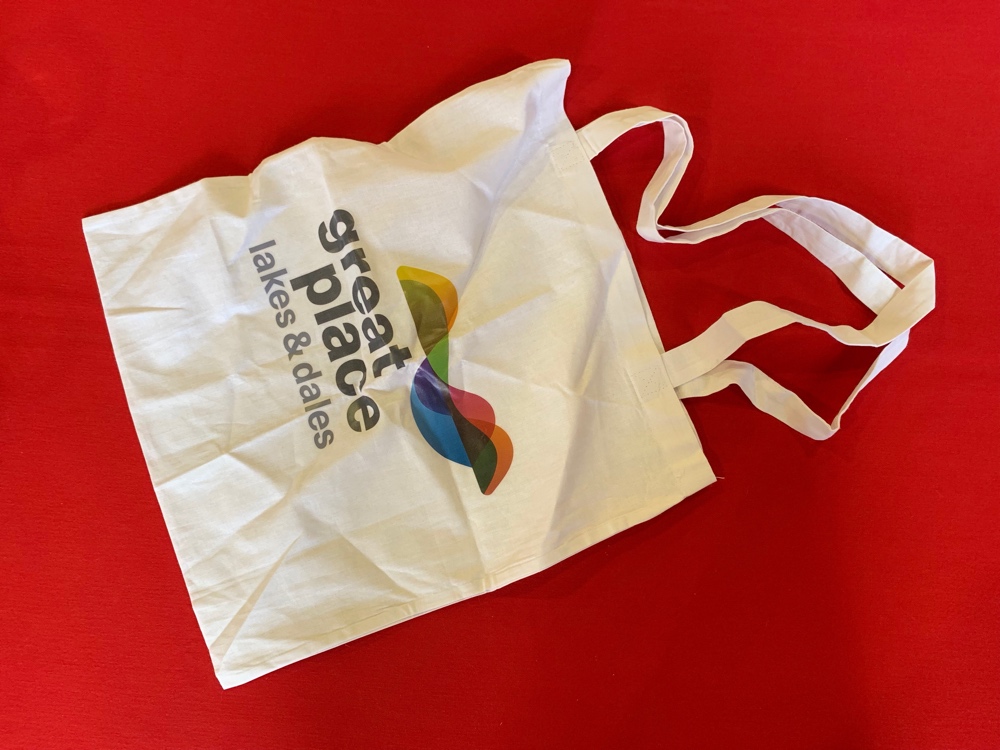 Hannah lives in the Lake District, and her first conference poetry event was at the Lakes and Dales conference. It is much more than an organisation to her – it’s the connection of different creatives which has allowed her to meet many people – from potters to printmakers, bloggers to documentary makers.