Why is it that Newcastle was the only area of the North East to vote to remain in the European Union in the referendum?

Newcastle was alone in the North-East region in voting to remain in the European Union, albeit by a very small margin. Compared to the relatively large margins voting to leave in the region, this is still significant. Since the conversation around Brexit has been often dominated by the issue of immigration, we can look to these statistics to help explain the result in Newcastle. 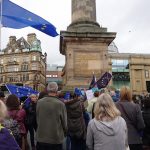 The figures tell us that people in areas that had the smallest proportion of foreign-born residents voted largely to leave the EU, whilst the opposite was true of those with the largest proportions. This can be said of Newcastle, which has the highest proportion in the region at 13.4%. However, The Economist paints a more complex picture of a further trend, which is that areas with the highest amounts of change in the foreign-born population voted to leave the European Union, even if they still constituted a low proportion of the population. Newcastle seemed to buck this trend as the city in the North East with the highest increase in foreign-born residents between 2001 and 2011 and yet still voted overall to remain.

To find out what it is that sets Newcastle apart, the statistics can only go so far. Walking through the heart of Newcastle, it is hard to ignore the restaurants and specialty shops that create a multicultural atmosphere in the city – you can travel from Poland to Persia in minutes. I spoke to some of the foreign-born workers in these restaurants and found overwhelmingly positive views of Newcastle. In fact, all of them considered it their home.

Buke, who moved to Newcastle from Iran in 1978, described the people here as ‘genuine and kind’ and despite original plans to move back to Iran, decided after a visit back that Newcastle was home and he hasn’t looked back since. Bassam, who came here from Lebanon in 2002, said: “I go to Lebanon 5 times a year but when I’m there, I can’t wait to come back.” 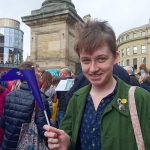 When asked about negative experiences, most echoed the idea that they have experienced nothing more than can be ‘expected’ from any place. Beatrice said it was indeed ‘the opposite: she had ‘had negative conversations with people in other places in England and not Newcastle’ since moving here from Spain in 2011. She did note a change after Brexit in that many in the Spanish-born community are returning to Spain, although she plans to stay here with her husband.

She tells me of a protest going on in Monument called ‘Love the North East: Stop Brexit’, where people from across the North East have gathered in Newcastle to protest the result of the EU referendum. The crowd was mainly non-migrants concerned about its ramifications not only on their own lives and families, but on others too. Nancy, a student at Newcastle University from Lancaster, condemned the anti-immigrant rhetoric surrounding Brexit, saying ‘We need to stay strong and make sure we stand against it.’ 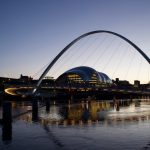 The slogans at the protest, including chants of ‘Xenophobia: Not in my name’, suggest that the experiences of immigrants in Newcastle may not all be as positive as those I have heard today. Bridget from Northumberland, representing Angels for Europe at the protests, described the post-Brexit atmosphere as ‘emotional’ and a ‘civil war of minds’. As the protest continues and the debate rages on, I head to a Greek restaurant for as close as a taste of ‘home’ as I can find, a spanakopita in a good old English takeaway box.