“ONE SINGLE ROSE IN NEWCASTLE”

‘I’m not the one to ask for advice. I’ve had all the same problems. My men haven’t stuck around.’

So I thanked the cleaner and left the hotel.

‘One single rose. One card to say: I love you.’ Arthur advised me.

Arthur wanted some money for food. He had a mate waiting off behind him. I offered Arthur the crisps in my bag. He said money for food later.

His last advice was this:

I decided to review hand dryers.

Burger King on Northumberland Street had a vintage Vent Axia. The sink to hand drier ratio was 2:1. It was motion sensitive, and the same puff as my emphysemic grandad used to muster. 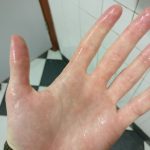 I bought some football boots from Sports Direct, as I hadn’t known metal studs were banned in our league.

In Eldon Square shopping centre I couldn’t find the toilets. So there were no hand driers to be reviewed there. I got lost; sat down on a bench because of sweat and a hangover. I took off my coat.

There was gum tacked all over it. It was becoming a day of disappointments.

H&M had no toilets I could see. I couldn’t find Mcdonalds. And I assumed you had to be a patron of Greggs to review their hand driers, so I just walked past.

I would walk around Newcastle, I decided.

Stevie D from Liverpool was saying to everyone: ‘I know you can all whistle, you do it at the football! Have a bit of fun! Have a whistle!’

Tony was the only guy that whistled. 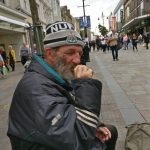 It looked like an ACME Thunderer 60.5 Metal Official Referee whistle. It blew my ear open.

I would go back to the hotel.

On my way I thought: ‘I should have asked people, where’s the place to find love in Newcastle?’

Then I saw Arthur’s mate walk past, the one who had been waiting off behind him. But there was no Arthur around.

The last thing I did was take this photo, a street I walked past: 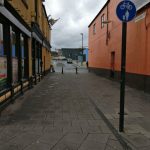 I’d thought there’d be something colourful in it. But I’m a rubbish photographer. And it’s ordinary photograph.

I prefer this video of Arthur: