WE NEED TO TALK ABOUT TESCO

Hello Mr Finlay, how are you?

That’s great to hear. Now I understand that you’ve just had your lunch.

Could you tell us a bit more about that?

Well, I had a Meal Deal at one of the Tesco Expresses in Newcastle — an establishment I frequently patronise.

So tell us about this Meal Deal, Mr Finlay.

Well, the deal entitles you to a snack, a sandwich and a drink of your choice for a mere three pounds.

Exactly! So first of all I had a packet of McCoy’s Ridge Cut Salt and Malt Vinegar Flavour Ridge Cut Potato Crisps.

So did the packet, Mr Worrallo. 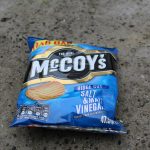 Fair enough! And did you find this a satisfying experience?

Immensely! A packet of McCoy’s is always a pleasure. I infinitely favour it over brands such as Walkers — the ridge cut allows for a far greater depth of flavour.

And you chose Salt and Vinegar?

I did. Often too sharp a flavour for my palette, but McCoy’s always gets it just right. Over all I would rate this packet 8 out of 10.

Marvellous. Then what did you select for the second part of your lunch?

A Tesco’s Own Falafel and Beetroot Sandwich. A risky move, if I say so myself, but it paid off. 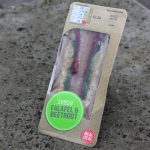 Tell us more about that.

Well, falafel is a classic flavour and a staple of the twenty-first century middle-class diet, but I’d never seen it combined with beetroot before.

Absolutely, Mr Worrallo. But it was a successful move by Tesco as the sweetness of the beetroot beautifully complemented the spice of the falafel, as well as the colour being immensely pleasing on an aesthetic level. My only complaint would be the stickiness which I suppose is unavoidable with a vegetable of beetroot’s ilk.

Indeed. A mark out of ten?

Which brings us to the third and final part of your lunchtime experience, Mr Finlay. Your drink. What did you end up choosing?

I deliberated over this one far more than the others, but I eventually went for an Innocent Magnificent Mango Smoothie.

And what swung it for you?

I beg your pardon?

My smoothie was wearing a tiny hat. Knitted, salmon pink, with a yellow bobble. I can never say no to a hat. 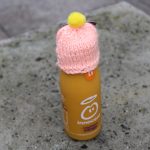 But what’s even better is that the hat was part of an Age UK campaign, and so my purchase raised an entire 25p for the charity.

The hat makes sense now! But what of the smoothie itself?

Cool, sweet, highly refreshing. I normally prefer juices over smoothies — the consistency, you know — but this one hit the spot for me in a way no smoothie ever could.

Then again, if I were to give a score to the entire meal, I would round that down to 8 out of 10.

Why would that be?

The bench I was sitting on was a bit cold.

Fair enough. Thank you for joining us, Mr Finlay, and I hope you have even more success in your future lunchtime endeavours.