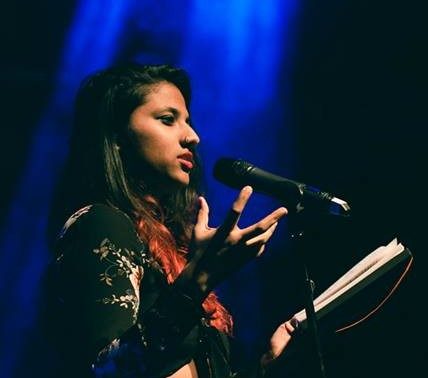 The Squad’s Prerana Kumar is one of 12 poets chosen to perform at the Words First summer showcase in Manchester on July 27th.

The project run by BBC Contains Strong Language, BBC 1Xtra and BBC Asian Network celebrates the most talented poets and spoken word artists aged 18-30 from across the UK.

Following professional mentorship and regional showcases in Edinburgh, Bristol, Newcastle, London and Manchester, the most stand out poets were selected to go on to perform at the Summer Showcase. Six poets will be selected from the showcase to perform at the Contains Strong Language festival in Hull (27th – 29th September). This performance will be broadcast live from 1Xtra and the BBC Asian Network and poets will also be published in a new book of poetry edited by Jude Yawson.

Prerana is also appearing in York on July 30th at the Say Owt End of Season Showcase, as a previous Say Owt Champ.