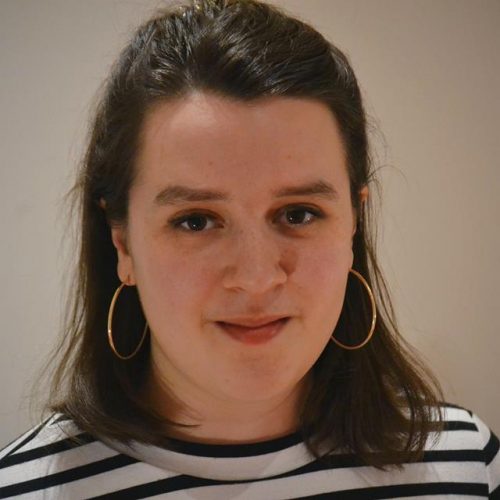 Georgia Affonso is a playwright and theatre-maker based in Manchester.

She is currently on the Northern Voices Scheme at BBC Writersroom.

Georgia co-manages No Door Theatre who produce plays and scratch nights that place female roles at their centre. No Door recently staged Georgia’s second play Runway to a sell out audience at Oxford Playhouse (BT Studio) as part of Offbeat Festival. Runway was longlisted for theatre503’s 2018 Playwriting Award and the Alfred Bradley Award (BBC). No Door also staged Georgia’s first play ‘forgive-me-not’ at Ziferblat, Manchester in 2016.

Currently, Georgia is working on a new play: ‘Incubator’ which will go into R&D for a week with director Hannah Calascione at HOME theatre, Manchester in July.

In 2018, Georgia was the Associate Young Writer for Northern Broadsides and led ‘From the Ashes’ a project linking BTEC students from Calderdale College to Northern Broadsides’ production of Hard Times, culminating in a piece she wrote performed by the students at The Viaduct, Halifax.

She was one of three Squad writers to write short plays for Here and Now, a collaboration between Lit UP and John Godber touring libraries and arts centres in the East Riding.

Georgia incorporates music into her theatre and spoken word. She frequently collaborates with composer Sophie Sully. Recently they have produced ‘Christmas’ Story’ for No Dice Collective, ‘Three poems by an Angry Bird’ for Collective31, ‘Salt Fiend’ a spoken-word piece for No Dice Collective, ‘Stick-Stock-Stone Dead’ was staged at Manchester University Music Society’s Estival in 2016 and ‘Dora’ was recently produced by Manchester Contemporary Youth Opera at the Antony Burgess Foundation.

Georgia graduated from the Music and Drama undergraduate degree at the University of Manchester in 2016.

Send a message to Georgia Affonso